your house of bad energy and to connect you with the Spirit.

It is a wild tree found throughout central and South America. The tree belongs to the same family (Burseraceae) as frankincense and myrrh. It is widely used in folk medicine for stomach ache, as sudorific, and as liniment for rheumatism.

Traditionally, people living in coastal areas use its smoke to keep away mosquitoes and cleanse the house of “negative spirits”.  Since ancient times, shamans and folk healers have used it to alleviate colds, allergies, headaches and rheumatic pain.  In their spiritual-religious rituals, shamans use Palo Santo as a tool to attract good luck, repel negative energies and communicate better with the spirits.

Aged heartwood is rich in terpenes such as limonene and α-terpineol. It is composed of around 112 chemical compounds which make it antibacterial (alfa-pinene), antiseptic (terminen-4-ol), sedative and insecticide (carvones). But the most important element, limonene (62.88%) is said to have chemotherapeutic properties. -Source Wiki 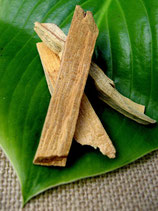 The history of Palo Santo – The Legend of Cosakait

According to a folk legend, when the world was in its embryonic phase and there were very few human beings, Cosokait, the most handsome and virtuous of men fell in love with a young maid. The young girl didn’t reciprocate his feelings and sadness made him seriously ill.  On his death bed he called for the young woman several times to see her one last time, but she didn’t go.

“Please tell her that I don’t want to die, but Yago (God) is taking my life away.  I’ll be always with her, I will ornate her head with perfumed flowers. I will frighten insects away from her. I will give fragrance to the water that her lips drink.  I will go to heaven in the aromatic smoke during the NAREG ceremony.  And I will be wherever she is and will give her whatever she asks for…”

After these words, he was consumed by fever and died invoking her name.  Where he was buried, a tree grew. Its wood had a soft fragrance that when it was burned would release a deep sweet aroma.  It was the Palo Santo tree, the symbol of love, kindness and longing for an impossible love.

For its elevated value and nobility, the Tobas tribe consider Palo Santo a sacred tree and call it Cosakait in honor of the legend.

And for its virtues and values, and its connection to my home, and this legend, Palo Santo will always be the fragrance of my spirit.