The Yanomami are one of the largest relatively isolated tribes in South America. They live in the rainforests and mountains of northern Brazil and southern Venezuela.

Like most tribes on the continent, it is believed by some schools of thought, that they probably migrated across the Bering Straits between Asia and America some 40,000 years ago, making their way slowly down to South America. Today their total population stands at around 32,000. At over 9.6 million hectares, the Yanomami territory in Brazil is twice the size of Switzerland. In Venezuela, the Yanomami live in the 8.2 million hectare Alto Orinoco – Casiquiare Biosphere Reserve. Together, these areas form the largest forested indigenous territory in the world.

The forest is life.

It is not money."

a leader of the Yanomami

The Yanomami live in large, circular, communal houses called yanos or shabonos. Some can house up to 400 people. The central area is used for activities such as rituals, feasts and games. Each family has its own hearth where food is prepared and cooked during the day. At night, hammocks are slung near the fire which is stoked all night to keep people warm.

The Yanomami believe strongly in equality

among people. Each community is independent from others and they do not recognize ‘chiefs’. Decisions are made by consensus, frequently after long debates where everybody has a say. Like most Amazonian tribes, tasks are divided between the sexes. Men hunt for game like peccary, tapir, deer and monkey, and often use curare (a plant extract) to poison their prey. 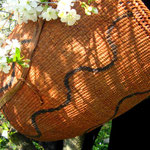 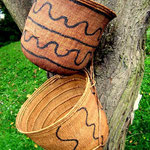 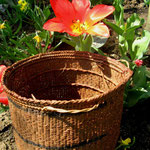 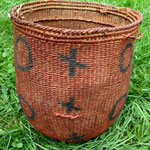 Although hunting accounts for only 10% of Yanomami food, amongst men it is considered the most prestigious of skills and meat is greatly valued by everyone. No hunter ever eats the meat that he has killed. Instead he shares it out among friends and family. In return, he will be given meat by another hunter.

Women tend the gardens where they grow around 60 crops which account for about 80% of their food. They also collect nuts, shellfish and insect larvae. Wild honey is highly prized and the Yanomami harvest 15 different kinds.

Both men and women fish, and timbó or fish poison is used in communal fishing trips. Groups of men, women and children pound up bundles of vines which are floated on the water. The liquid stuns the fish which rise to the water’s surface and are scooped up in baskets. They use nine species of vine just for fish poisoning.

The Yanomami have a huge botanical knowledge and use about 500 plants for food,

medicine, house building and other artefacts. They provide for themselves partly by hunting, gathering and fishing, but crops are also grown in large gardens cleared from the forest. As Amazonian soil is not very fertile, a new garden is cleared every two or three years. -Source Survival International

Their handicraft and baskets are beautifully woven by the women of their tribes. They make two main styles of baskets which are called shotos and carrying or burdon baskets. They are used for everyday uses as in the gathering of food, firewood, and cooking. They are colored with onoto and then decorated with charcoal with various geometrical designs including, for example. waves, circles, dots and crosses. These baskets are a sustainable item made from the resources of the nature around them and are an integral part of their culture. Click for a unique look at their symbols & art here.

Carrying baskets fulfill a variety of uses in their culture. They maybe made in different sizes and often include a long strap that is worn on the head so that the basket may fall on the mid to upper back. Above they can be seen in the background of photo hanging from cieling beams and resting on the floor in the Shabono.

The materials used to make their

and Bixa orellana for color.

Above is a carrying basket

filled with yucca, a root vegetable

that is a staple of the Yanomami diet.