The kalimba is an African musical instrument, a type of plucked idiophone common throughout Sub-Saharan Africa.

Various kinds of thumb pianos have existed in Africa for thousands of years. The keys were originally made of bamboo but over the years metal keys have been developed. The instrument is known by different names in different regions of Africa, including mbira, mbila, mbira huru, mbira njari, hurdy gurdy, mbira nyunga, marimba, karimba, kalimba, likembe, and okeme, as well as marímbula (also called kalimba) in the Caribbean Islands.

The thumb piano was typically played while walking by traveling griots who keep the history of the tribe or village, and to entertain people with songs, stories, poems, dances, etc. It was thought in ancient times that the thumb piano was able to project its sound into the heavens and could draw down spirits to the earth. Some of them were evil spirits so the people would stop playing the music until the spirits had departed from the area. 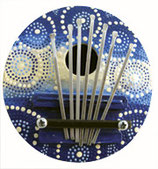 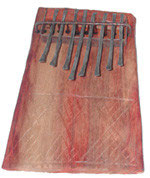 18cm x 10cm. These are really ethnic ones, straight from Zimbabwe. This musical instrument consists of a wooden board to which staggered metal keys have been attached.  In Eastern and Southern Africa, there are many kinds of mbira, usually accompanied by the hosho.