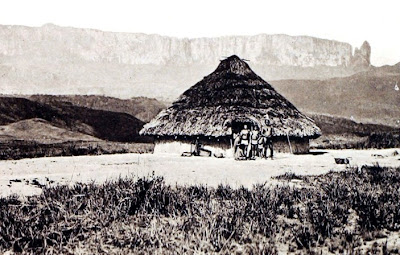 This creation myth describes how the first Pemon, the Sun, found a wife after meeting a water-creature known as Tuenkaron. The text is taken from "Tauron Panton" a book of myths collected by Father Cesareo de Armellada and published in 1989. The photographs are taken from the 1917 edition of German ethnologist Theodor Koch-Grunberg's book "Vom Roroima Zum Orinoco", which - unbelievably - has never been translated into English.

A long time ago Wei, the Sun, was an Indian who spent his time clearing and burning the mountain to make a conuco (jungle garden) to plant ocumo (Xanthosoma sagittifolium, a tuber eaten like cassava).

The Sun ate only ocumo. His face shone brightly.

One day, after work, he went to drink water and bathe himself in a stream. As he got closer he noticed a ripple across a pool of water as if somebody had submerged themselves. And he thought to himself, what could that be?

The next day he returned to the pool, but more quietly this time, and saw a small woman with very long hair that reached down to her feet. She was bathing herself and playing and beating the water with her hair.

When she noticed the Sun was coming she went down into the depths of the pool. But the Sun managed to grab hold of her hair.

"Not me, not me" shouted the creature, who was called Tuenkaron.
And she added: "I will send you a woman to be your companion and wife."

So the Sun released Tuenkaron's hair and let her go.

The next day, the Sun was cleaning his conuco and gathering trees to set fire to them when he saw a white woman that Tuenkaron had sent to him.

"Have you cleared the conuco yet?" asked the woman.

"Not yet. I've only just cleared this this bit you can see and made a few piles," the Sun answered.

"Pull out those ocumos that I roasted from the embers, so we can eat," the Sun said to the woman.

The woman took them from the embers and and said: "Here they are." And they ate them.

When she had started a fire she said "it's done".

"Go and fetch water now", said the sun, so the woman went to the stream with her camaza (gourd) and bent down to collect water.

But while she was filling the camaza the ends of her fingers began to go soft and then her arms and then her whole body.

And she ended up in a heap, like a pile of clay.

Because the woman was made of white mud.

As the woman did not return, the Sun went to look for her. When he got to the stream, he found the water in the pool was the colour of mud; it was the woman who had muddied the water as she had dissolved.

The Sun was upset and said: "This is what Tuenkaron sends me, a woman who can't even collect water".

After that he went upstream to to drink water that wasn't muddied. And as it was already getting dark, the Sun went to sleep in his house.

When he awoke the next day, the Sun went back to his conuco to continue clearing it.

While he was working, at midday, just as he was going to eat, Tuenkaron sent another woman who was black, like somebody from that race.

"Have you cleared the conuco yet", the woman asked the Sun.

"Yes and no", he answered, "I've only cleared this little bit you can see."

Then he said: "Go and fetch some water so we can eat together."

The woman went to the stream, fetched water and they ate the ocumo together. After eating the Sun went back to work and said to the woman: "While I carry on making piles, you set fire to the piles I've already made."

The woman took a split stick to start a fire. She knelt down with some embers and blew on them to start a flame but the fire heated up her face and from there she started melting: her arms and then her whole body, until she ended up in a heap like a pile of wild wax.

Because she was made from wax.

The Sun turned round several times to see if she was starting a fire but as he never saw smoke rise from any of the piles he went to see what the woman was doing. And he said to himself: "But I told her to set fire to the piles".

What a surprise he had when he got closer and found the woman melted and turned into a pile of wax.

So the Sun went to the stream and said: "How bad and tricky is Tuenkaron . Well, now I'm going dry up this stream, I'm going to dry up all the water".

But Tuenkaron, without letting herself be seen said: "No don't do that, wait and I'll send you a woman."

But that night the Sun's heart was not calm. That night he went to bed angry.

The next day, the Sun woke up and, as usual, went to work in his conuco. And there leaning over her work was another woman with red skin (like sandstone) and a cooking pot in her hand.

The woman, coming forward, asked him: "Have you cleared the conuco yet?"

But the Sun didn't answer, as if he hadn't heard. He was on his guard after the last deceptions.

"Why don't you answer me?" the woman asked him.

"Because you're all fakes, you all dissolve or melt," the Sun said.

"If it's like that, I'm going back to Tuenkaron," said the woman.

Then he sent her to cook ocumo in the pot and the Sun watched as she put it on some rocks and how she made the fire. The Sun watched carefully all her skills and customs.

When it started to get dark the woman said to the Sun: "I came to go back".

"Well, make me dinner and you can go back," answered the Sun.

And when she had done it the woman said: "I'm going, I'm going to come back tomorrow early".

The next day, the Sun went to work earlier than usual. The woman also came early.
Again the Sun put the woman to the test: he sent her to fetch water, he sent her to make fire, he sent her to cook food. And seeing that she did not go soft, or melt, or crack he started to like her and he fell for her.

In the afternoon they went to bathe together stream and the Sun saw very well that the woman was of a reddish hue; like the bits of fiery stone that are usually found in the riverbeds. She was not white and she was not black.

The Sun said to the woman: "Let's go to my house". But the woman said; "I didn't tell Tuenkaron."

"So what," answered the Sun.

"There is no way I can do that," said the woman.

"Okay, and I shall also tell Tuenkaron, so I can stay with you," she said.

And sure enough, the next day the woman came very early, she cooked the food, she roasted the ocumo, dug up cassava roots, grated them and made cassava bread. That day she stayed the night and slept with the Sun and since then they have always lived together.

And they had several children, and these were the Makunaima.

Some Indians say the name of the mother was Aromadapuén. And the names of the children were: Meriwarek, the first-born; then Chiwadapuén, a daughter; Arawadapuén, the second daughter; and Arukadarí, the youngest, who is very often called Chiké.