Painting has been the connecting element throughout Barbara Navarro's work, which is currently focused on installations in which she explores the topological quality of using double-sided canvases that transform the paintings from two dimensional surfaces to three-dimensional sculptures. Her primary area of investigation has been the multiplicity of techniques and supports which allow artists in diverse cultures to express themselves and in particular, to use the human body itself as a canvas, as in ritual body paintings by the Yanomami of the Amazon.

Since 1997, yearly voyages to the Amazon Rainforest have inspired several series of paintings created while living with the Yanomami Indians. For these works, the support used is rough burlap prepared with an acrylic medium then textured with a mixture of sand and lava. This supple canvas is then rolled and easily transported on expeditions into the Amazonian forest. They are then painted using a mixture of acrylic colours and roucou, the plant based pigment used by the Yanomami for their body paint.

In her installation, "The Way of the Shaman," Navarro hangs two "Totemic Sculptures" from the ceiling which represent the Yanomami view of the cosmos and symbolize the shamanic energies flowing between the earth and sky. The fire embodies the destruction of the connection the shaman provides between his people and the world. Navarro's installation creates a tactile, auditory and visual environment which transcends the physical space of the gallery, thus inviting the spectator to enter an ancestral mystical universe that is now being threatened.

and a video of The Way of the Shaman 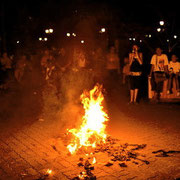 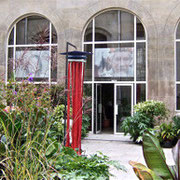 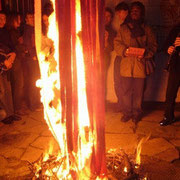