Amazonas, the opera: a world premiere – and a world first

A groundbreaking operatic spectacle puts Brazil's Yanomami tribe in the spotlight – and highlights the destruction of the rainforest. 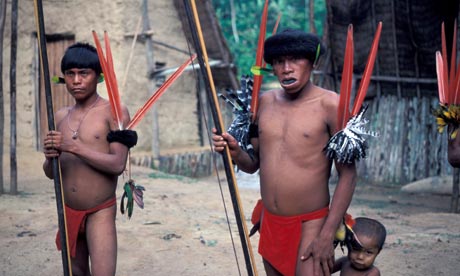 It has taken four years and more than £3m to produce a remarkable production called Amazonas, a multimedia, transcultural German-Brazilian tragic opera, developed in four languages, that will have its world premiere this weekend.

Perhaps unsurprisingly, a lot of transatlantic to-ing and fro-ing was involved. Five shamans from the Amazonian Yanomami tribe took part in a workshop in Karlsruhe to explain their skills to composers Klaus Schedl, Ludger Brümmer and Tato Taborda. In turn, the composers made several trips to a Yanomami village to record the sounds of the forest.

For Laymert Garcia dos Santos, the Brazilian philosopher and sociologist who masterminded the whole thing, this epically ambitious undertaking has been a nerve-wracking experience. But the politics have made it worth it. "It is an attempt to arouse a reaction to the destruction of the Amazon rainforest through emotion, rather than through the cold numbers of statistics," he says. "It's a scientifically established fact that the forest's destruction will have repercussions on the entire planet, but this still hasn't shocked people into stopping the process. So the idea is to immerse the spectator in the situation, so they can feel with their senses what is happening and be affected by it."

One of the largest indigenous groups in the Amazon, the Yanomami have only recently had regular contact with outsiders, but they actively participated in the development of the opera. "They're not in the opera as exotic objects, or as an archaic group," says dos Santos, "but they possess ancestral knowledge which is at the same time completely relevant to the modern world."

The libretto is based on the letter sent by Sir Walter Raleigh to Queen Elizabeth I in 1595, written when he was attempting to find the mythical El Dorado. He ended travelling up the Orinoco river in present-day Venezuela, where many Yanomami now live, and described discovering the "large, rich and bewtiful empyre (sic) of Guiana".

Despite being based on a historical source, the first act of Amazonas takes place in the future, after the rainforest has been destroyed, "in a time after the end of time". In the second act, the Yanomami shaman fails to prevent the triumph of the Xawara, the evil spirits, and is killed by them; the act ends with nothing less than the fall of the sky, the Yanomami's central myth, represented here by (lightweight) panels crashing down on the audience. The final act, created by multimedia artist Peter Weibel, takes place around a conference table where politicians, economists, scientists and missionaries argue about the future of the Amazon.

The Yanomamis' own organisation, Hutukara, hopes the opera will draw attention to the constant threat against their territory from goldminers and farmers. After the Munich premiere, Yanomami teachers will visit German and Brazilian schools, hoping it will also help the younger generation of Yanomami – under growing siege from western culture – appreciate their own culture more by seeing it valued by others.

From Munich, the opera goes on to Lisbon and Rotterdam. But Dos Santos has an even grander dream – to see it performed in the heart of the rainforest itself, at the opera house in the Amazon capital of Manaus